Property "Address" (as page type) with input value "210 Ridge McIntire Road Suite 325, Charlottesville, VA 22903" contains invalid characters or is incomplete and therefore can cause unexpected results during a query or annotation process.

The Mind & Life Institute is a US-registered, not-for-profit 501(c)(3) organization founded in 1991 to establish the field of contemplative sciences. Based in Charlottesville, Va., the institute “brings science and contemplative wisdom together to better understand the mind and create positive change in the world."[1] Over three decades, Mind & Life has played a key role in the mindfulness meditation movement by funding research projects and think tanks, and by convening conferences and dialogues with the Dalai Lama. Since 2020, Mind & Life's grant-making, events, and digital programs have sought to nurture personal wellbeing, build more compassionate communities, and strengthen the human-earth connection.[2] 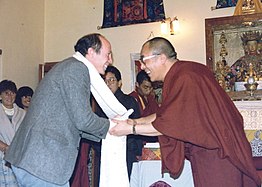 Mind and Life Dialogues, forerunners of the Institute, were initiated by American entrepreneur R. Adam Engle in 1983.[3] He heard of Tenzin Gyatso, the 14th Dalai Lama’s interest in modern science[4][5] and offered to arrange a dialogue for him with selected scientists.[6] The Dalai Lama accepted and authorised Engle to set one up.[7]

In 1984 Chilean neuroscientist Francisco Varela heard about this.[8] Having participated in a conference on consciousness attended by the Dalai Lama in 1983,[9] and like Engle a Buddhist practitioner since 1974, he was interested in further exploration of the interface between science and Buddhism and contacted Engle, offering to assist.[10]

Engle, Varela, and the Dalai Lama saw Buddhism and science as different methodologies with a similar aim: to investigate nature and reality, using knowledge gained to improve the quality of life and the planet.[11] They concurred that science uses technology and the scientific method as its means while Buddhism uses the human nervous system refined by meditation and rigorous mental and emotional training.[8][12] Until then, there had been no mechanism for scientists and Buddhist masters to meet and share their findings in dialogue. The concept pioneered a new interdisciplinary, cross-cultural engagement.[6][13]

Engle organized the original Mind and Life Dialogue in October 1987 at the Dalai Lama’s residence in Dharamshala, India as a week-long event.[14] Six scientists including Varela and two interpreters gathered with His Holiness and spent five hours daily, sharing views and discussing the sciences of the mind[6] in what was described as a ‘living room conversation.’. They explored topics ranging from cognitive psychology, perception, memory, and the development of the brain to causality and karma.[15] At the end, Engle asked the Dalai Lama if he wanted to do it again. The answer was "yes," and the series of dialogues was born.[16]

The second dialogue was a two-day event in October 1989 in Newport Beach, California.[6] At the third dialogue, held in Dharamsala in 1990, it was decided that in order to organize and fund further dialogues and potential research programmes the Mind and Life Institute should be incorporated as a non-profit organization in the USA.[17][18][19] The institute was incorporated in 1991. Engle was elected Chair and CEO, a post he held for 22 years until his retirement in 2012 having guided its development into "a worldwide and influential organization bringing together the highest standards of modern science and contemplative practice." Engle was then succeeded by the physicist and author Arthur Zajonc.[20]

By 1998 Mind & Life had hosted seven dialogues between numerous world renowned scientists, philosophers and the Dalai Lama on cognitive neuroscience and physics, and published six books relating the dialogues to the general public.[21]

By 2019, 33 Dialogues with the Dalai Lama had been hosted. The format then shifted to shorter, more frequent conversations between leading thinkers and spiritual leaders such as the Dalai Lama on critical issues of modern life at the intersection of scientific and contemplative understanding.

In 2020, Mind & Life refined its strategic vision and expanded its digital programming, including the launch of the Mind & Life Podcast, to elevate key insights that inspire action toward positive change.

In 1998, to increase Mind & Life's potential for societal benefits, Engle broadened its mission to include carrying out scientific research.[16] This idea was encouraged by the Dalai Lama, who, at the next dialogue in 2000, suggested scientific investigation under laboratory conditions to establish whether Buddhist contemplative practices could be of significant benefit to modern society, and if so to find a way of teaching the subject in a secular environment.[16] A research program was launched accordingly as a result of Mind & Life's first public dialogue, held at MIT in 2003, entitled "Investigating the Mind."[10] [22] Participants included Nobel Laureate scientist Daniel Kahneman and Eric Lander, Director of the MIT Centre for Genomic Research.[23] This conference was attended by 1,200 people and marked the birth of contemplative neuroscience.[24][25][26]

In 2004, Mind & Life launched its Summer Research Institute at the Garrison Institute in New York. This conference presented the first curriculum on contemplative neuroscience to graduate students, post doctorates and science faculty members.[27]

In the same year, Mind & Life started the Francisco J. Varela Research Awards,[28] which provided pilot study funding to qualified applicants on a competitive basis. Through this and other grant mechanisms, by 2020, Mind & Life had awarded more than $5.2 million to over 270 projects in cognitive science, psychology, medicine, anthropology, religious studies, and education—in 30 US states and 20 countries. As a result of Mind & Life funding, more than 280 scholarly articles and books have been published, and our grantees have gone on to compete successfully for over $110 million in follow-on grant funding from other sources.[29]

In 2012 Mind & Life hosted its inaugural International Symposium on Contemplative Studies (ISCS) in Denver Colorado, with 700 attendees from the field of Contemplative Science and Studies research.[30] Subsequent research conferences were held in Boston (2014), San Diego (2016), Phoenix (2018), and online (2020).[31]

Publications relating to the dialogues

This article is based (in parts) on the article Mind and Life Institute from the free encyclopedia wikipedia and is licensed under GNU license for free documentation and the Creative Commons Attribution/Share Alike. On wikipedia there is a List of authors accessible. More about importing from wikipedia on page Imedwiki:Importing from wikipedia.
Retrieved from "https://en.imedwiki.org/index.php?title=Mind_and_Life_Institute&oldid=15242"
Categories:
Cookies help us deliver our services. By using our services, you agree to our use of cookies.