Property "Address" (as page type) with input value "Wikipedia:Arlesheim|Arlesheim" contains invalid characters or is incomplete and therefore can cause unexpected results during a query or annotation process. 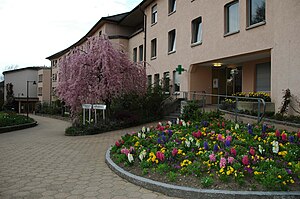 The Arlesheim Clinic is a hospital in Dornach (Switzerland) with anthroposophic medical orientation. The hospital focuses on Internal medicine, Oncology, Psychosomatics and Psychiatry.

It resulted from the April 1, 2014 merger of the Ita Wegman Clinic with the smaller oncology oriented Lukas Clinic (founded in 1963), which was no longer economically viable. While in the merger phase, Haus Wegman was responsible for stationary and Haus Lukas for ambulatory treatments, since 2016 oncology has been completely moved to Haus Wegman and psychiatry and psychosomatics to Haus Lukas.[1][2]

The clinic also produces anthroposophic medicines. The public clinic in private, non-profit sponsorship has 82 beds (as of 2016) and is, among other things, a member of the Association of Non-profit Hospitals for Anthroposophically Extended Medicine e.V. (AnthroMed)[3] as well as associations of private clinics.

On the grounds of the clinic is the former Ita Wegman residence, designed by Rudolf Steiner and built of wood, which is now used by the Ita Wegman Archives.

The Ita Wegman Clinic was 1921 founded as a Private Clinic "Clinical Therapeutic Institute" ("Klinisch-Therapeutisches Institut") by the physician Ita Wegman with the support of Rudolf Steiner. She acquired the Arlesheim property Hirsland 198 for this purpose at the end of 1920. The institution was internationally the first and until the 1960s the only anthroposophic hospital worldwide.

With the participation of the company Futurum AG, the International Laboratories and Clinical-Therapeutic Institute Arlesheim AG was established in 1922, which remained the operator of the institution for two years until it sold the Clinical-Therapeutic Institute in 1924 to the Goetheanum Association in Dornach, today's General Anthroposophical Society. The pharmaceutical part was first renamed "Internationale Laboratorien Arlesheim AG" and in 1928 to Weleda.[4]

In 1924, the Sonnenhof in Arlesheim was founded as a curative education and social therapy Institution.[5] In 1926, a first extension of the clinic was built.[6]

In 1931, Ita Wegman founded the nonprofit association "Clinical Therapeutic Institute", which became the institution's sponsor in the same year by buying back the clinic from the General Anthroposophical Society.[7]

1935 The Verein für Krebsforschung was founded.[6]

1936 Opening of the Casa di Cura in Ascona, a dependency of the clinic in Ticino.[6]

1954 Expansion of the Clinical Therapeutic Institute.[6]

Since 2008, the clinic has been an economically separate, legally independent Aktiengesellschaft[7] owned by the General Anthroposophical Society.

2014 Merger with the neighboring Lukas-Klinik to form Klinik Arlesheim.[6]

2021 Start of new construction of Haus Wegman as a wooden building, extension emergency/IMC.[6]

This article is based (in parts) on the article Klinik Arlesheim# from the free encyclopedia wikipedia and is licensed under GNU license for free documentation and the Creative Commons Attribution/Share Alike. On wikipedia there is a List of authors accessible. More about importing from wikipedia on page Imedwiki:Importing from wikipedia.

Retrieved from "https://en.imedwiki.org/index.php?title=Clinic_Arlesheim&oldid=14549"
Categories:
Cookies help us deliver our services. By using our services, you agree to our use of cookies.