Anthroposophic medicine (or Anthroposophical medicine) is an integrative medical system that extends conventional medical practice with an Anthroposophic, more encompassing understanding of the human being as physical body, life body, soul (or astral body) and I. Developed the 1920s by Rudolf Steiner (1861–1925) in conjunction with Dr. med Ita Wegman (1876–1943), anthroposophical medicine views these four aspects of the human being as interpenetrating and concretely relating to aspects in the natural world. Remedies are extracted from nature and used as phytotherapy, potentized substance, or externally applied. Anthroposophic medicine has developed and expanded the fields of artistic therapy, painting therapy, sculpture therapy, music therapy, speech therapy and eurythmy therapy (an Anthroposophic movement therapy). Anthroposophic Nursing extends the field of the practical nurse with a holistic approach towards illness and healing and uses rhythmic massage, Einreibung, therapeutic baths like the oil dispersion bath and herbal compresses. Psychotherapy and biography work are also a part of Anthroposophic modalities. Anthroposophic medicine is practiced in over 65 countries with an estimated 24 institutions (hospitals, hospital departments, rehab centers) in Germany, Switzerland, Sweden, Italy, The Netherlands, and the United States and over 240 outpatient facilities worldwide.[1] In Europe there are over 2,700 physicians fully trained in Anthroposophic medicine and a survey found that 15,000 physicians prescribe Anthroposophic remedies in Europe.[2]

The Fourfold Human Being

The human being is viewed in four interrelating aspects. The most basic is the physical body which the human being has in common with minerals, plants and animals. Without any other aspect, this would only be a corpse. The forces in this area are those that are present in machines. The living element is called the life body or etheric body and it is seen as the foundation of growth, metabolism and reproduction that man has in common with plant and animal organisms. The soul or astral body is common to animals and is seen as the cause of consciousness, feelings, movement and their respective organs like muscles and nerves. The spirit or "I" is unique to humans and allows the activity of rational thinking, self-control. It is the reason for the upright posture, culture and morality.

Though the physical body is easily studied by analytic science, Anthroposophic medicine does not give this undue precedent over the other aspects of the human being. Instead science is adapted into a form suitable to the unbiased study of each of the other three higher aspects. Goethean science is the intuitive scientific approach developed by Anthroposophy.

The Anthroposophical View of Nature and the Human Being[3][4]

The threefold human being

A basic concept of the anthroposophical teaching of illness that remains almost unchanged to this day is the concept of the "threefold structure" of the human being developed by Steiner in the early 1920s.[5] Steiner distinguished three organ systems:

Some drug preparations in anthroposophic medicine are made from potentized substances, similar to those used in homeopathy though there are some fundamental differences in methods as well as how remedies are used. Scientific technique has struggled when applied to homeopathic remedies.

Number of publications found on pubmed about anthroposophic medicine. Derived from[7].

Anthroposophic physicians have objected against controlles trials out of ethical reasons as they interfere with the doctor patient relationship and the medical judgement of the physician. In the recent decades there has been growing research in this field anyway (as can be seen in the figure to the right). One main focus were trials on mistletoe therapy. A main research goal has been epistemology and theory of medicine as concepts central to anthroposophic medicine like the etheric body or spiritual aspects are difficult to cope with in the conventional medical system.

The legal framework of anthroposophic medicine was centered around the Vidar hospital. The clinic existed from 1985 until 2019.

Having previously granted time-limited approvals for Iscador and several other preparations in anthroposophic medicine, the Swedish Medicines Agency decided in December 2013 to grant approval for the use of Iscador in individualized palliative cancer treatment as an adjunct to standard therapy.[8][9]

Poster about Anthroposophic Medicine from WCIMH 2017 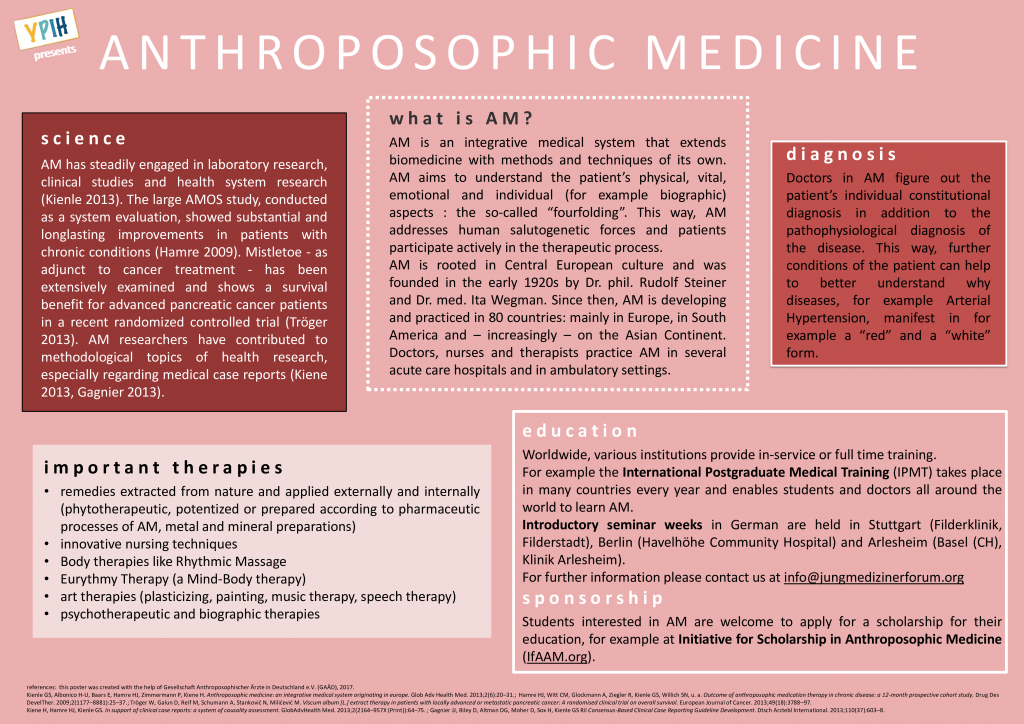 Retrieved from "https://en.imedwiki.org/index.php?title=Anthroposophic_medicine&oldid=15502"
Categories:
Cookies help us deliver our services. By using our services, you agree to our use of cookies.